After years of Twitter campaigns, a Warner Brothers/AT&T merger, and the launch of HBO Max, the Snyder Cut of Justice League is finally here!  For diehard Zack Snyder fans, and some DC fans, this was a momentous occasion.

Regardless of whether you like the original Justice League, or are a fan of Zack Snyder at all, you do have to admit that it’s quite inspiring for a creator to have his vision finally realized.  Especially considering how Warner Brothers really screwed him over and took advantage of his family tragedy to get rid of him back in 2017.

But amidst all the anticipation, does the Snyder Cut live up to all the hype?  For those who wanted it, definitely.  For others, it was just a longer version of a movie they already weren’t crazy about.

Way back when during production, Snyder said that Cyborg was the heart of the movie.  And upon its initial release that wasn’t entirely clear because we honestly didn’t get enough of him on screen.

This version gives him a full character arc, showing us his tragic origins with the car crash that killed his mother and injured him, and his father saving his life with the Mother Box, thus making him Cyborg.

He’s a bit moody in both versions, but you really see why here, he’s carrying an enormous amount of guilt, pain, grief, and animosity towards his absentee father who’s only now really trying to be good parent to him.

He goes from feeling lost, alone, and isolated, to finding a family that he’s always wanted to be a part of.  Batman may the brains behind the team, but Cyborg is definitely the heart.

Among the numerous reshoots that Joss Whedon did for the 2017 version, most of Superman’s scenes were reshot (hence the whole CGI mustache erasing fiasco).  His death in the previous movie was such a pivotal moment in this series and his return needed to be equally important.

Rather than just randomly show up (which we knew would happen), the Snyder Cut shows more of him reuniting with Lois and his mother.  It even features him going back to his ship and hearing the words of both of his fathers, in particular Jor-El telling him that mankind with eventually “join him in the sun” and how he “will help them accomplish wonders”.

This is that very moment, and when he does arrive at the final battle against Steppenwolf, it’s a triumphant moment with Hans Zimmer’s “Ideal of Hope” theme playing.  It’s the glorious return of Superman that we were promised. 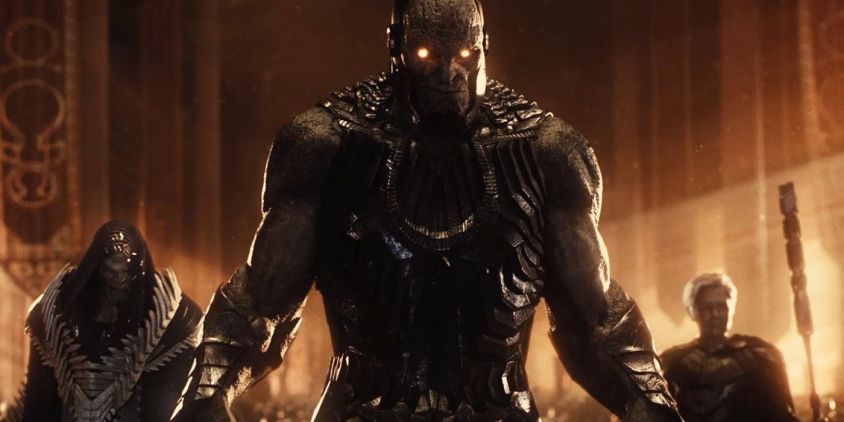 The Theatrical Cut famously (or infamously) didn’t even feature or mention Darkseid, opting to make Steppenwolf the lone villain, obsessed with saying “mother” 50 times in the movie.  The final CGI on his was also laughably bad.

However, he gets a complete makeover in this version with a better visual design, and while he’s the primary antagonist, we see that he’s but a servant of Darkseid, who’s the real threat.  His own visual design is pretty creepy as well, and he gives Thanos and Apocalypse a run for their money.

One of the few things that was actually added just for the HBO Max release was the inclusion of Jared Leto’s Joker.  Neither critics nor fans were really into his performance in Suicide Squad, and it seemed like the movie failed him more than he failed the movie.

He wasn’t given much to do, and his design was filled with bold choices that just happened to not be very good ones.  In his brief but memorable scene in Justice League, he still very much embodies the same manic energy, but his design is much creepier and worthy of his adversary in Ben Affleck’s Batman.

Leto’s Joker here seems less like a pretender trying to look tough and more like a genuine menace that really knows how to get under Batman’s skin.

As great as it was to see Zack Snyder’s full movie in its uncut form, those 4 hours do not go by quickly.  Obviously there are many formerly deleted scenes that make the movie much better by being in it.

But there are other scenes that probably would have been trimmed down by Zack Snyder himself had he been aiming for a 3 hour theatrical cut.  But because of all that happened, he didn’t want to exclude anything.

This results in some scenes lingering longer than they should.  The middle section of the Snyder Cut moves along pretty efficiently but the first hour and last half hour move to an unnecessary slow pace.

Whereas the Theatrical Cut only had 2 hours to cram everything in.  Granted, it missed out on a lot of character development, but plot wise, it keeps the story moving the entire time, and efficiently builds momentum to the climax.

One surprising omission from the Snyder Cut was the dramatic opening credit sequence that featured a montage of the world mourning Superman to Sigrid’s cover of “Everybody Knows”.

It remains one of the highlights of the Theatrical Cut and at the time felt like one of the few pure Snyder moments that was left completely intact.

The Snyder Cut instead opts to review Superman’s death, which sends out a call to the universe, alerting Darkseid.  It’s a scene that we’re already very familiar with from the end of Batman v. Superman, so it doesn’t really offer anything new.

As previously mentioned, the Theatrical Cut was better paced, and part of it was due to the effectiveness of those opening credits with a poignant, but powerful song playing.

So this is more something that the Theatrical Cut didn’t do that the Snyder Cut does, but doesn’t really work.

Zack Snyder has a history of creating music video-like scenes where something dramatic happens (usually with some slow motion) and the perfect song plays to convey the emotion of the scene.

It’s done absolutely perfectly in Watchmen during the Comedian’s funeral with the “Sounds of Silence”.  However, it’s not quite as effective in scenes like Aquaman going to the water and Flash saving a girl he has a crush on.

The issue is the songs chosen were far too slow and didn’t really match the tone of the scene.  In his other movies, these scenes help move the story along and with the tone, but in the Snyder Cut, they seemed to stop the movie in its tracks completely.

Also more of a minor issues, and one that probably doesn’t hold much relevance anymore.  The Snyder Cut included Willem Dafoe as Vulko and a bit more of Amber Heard as Mera.  And neither of them match up at all with how they’re portrayed in 2018’s Aquaman.

This include a completely different look for Dafoe and a weird “British” accent that Mera seems to be sporting that she definitely didn’t have in the other movie.  She also mentions that her parents are dead but we meet her father in Aquaman, played by Dolph Lundgren.  Again, it’s a minor issue, and even the Theatrical Cut was still inconsistent with the way it portrayed Atlanteans as only able to speak underwater in an air bubble.

While still not perfect, it does need to be said that the things that the Snyder Cut did better were much more important things than the Theatrical one.

It’s still the overall better movie and it’s great to see that it was even made.  But it’s just interesting how the Theatrical Cut still did some things right.

What did you like better about the Snyder Cut or the Theatrical Version?  Let us know in the comments!

Both versions of Justice League are streaming on HBO Max!